The Eastern Caribbean Center of the University of the Virgin Islands (UVI) will conduct the 2018 Virgin Islands Community Survey (VICS) during the months of November and December 2018. This scientific survey of a sample of households is a follow-up to the one conducted in 2016. The information collected is similar to that gathered in the Population and Housing Census of 2010.

“When processed, the 2018 VICS will provide data for agencies that organize and plan for the social, educational, health, economic and other needs of the community,” said Dr. Frank Mills, acting director of the Eastern Caribbean Center. “The data are also used by private-sector individuals for decision making and employed by others to develop important indices of the status of children in the territory,” Mills said.

The University of the Virgin Islands requests the cooperation of the public when interviewers carrying UVI photo IDs visit households on all three islands. Unlike the census, this is a scientific sample survey and not every household will be interviewed.

The public is assured of complete confidentiality of their information gathered, as the data are published in summary form only and individuals cannot be identified. As in the census, anonymity of respondents is a cornerstone feature of this survey.

“Each selected household can experience a sense of accomplishment by contributing to data that will greatly assist in the rational development of the Virgin Islands community,” Mills said.

For more information, call the Eastern Caribbean Center at UVI: 693-1020. 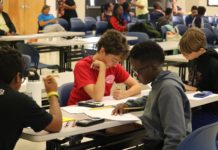