Virgin Islands police are investigating a rash of break-ins that took place in the last two weeks on St. John.

Morgan’s Mango, a popular Cruz Bay restaurant, was one of four businesses broken into overnight between Sunday, Oct. 6, and Monday, Oct.7.

The other three break-ins occurred at businesses located along St. John’s north shore within the Virgin Islands National Park.

One of the owners of Trunk Bay Snorkel Rental told the Source that burglars damaged a window and stole a small amount of money from a tip jar that same night.

“The burglaries are concerning and we’re actively investigating them,” said Deputy Police Chief for St. John David Cannonier. “We are going to be more visible and conduct more directive patrols.”

Police are getting assistance from video recordings taken from security cameras from at least two locations. The Animal Care Center posted photos taken by its security cameras on Facebook, showing two men breaking into a nearby car rental company during the early hours of Oct. 3.

Racetrack Gas on the Southshore Road also reported a break-in on Oct. 3.

A break-in was reported on Sunday, Sept. 19, at Shambles, a Susannaberg restaurant, the same night that a Rav 4 containing carpenter’s tools was stolen from a nearby parking area.

In other police activity during the period:

– On Oct. 8, Jordan Clendenin of Carolina, Coral Bay, was arrested and charged with possession with intent to distribute. Bail was set at $10,000 by order of the court.

– The blotter listed three separate reports between mid-August and mid-September of threats, including gun use, made by a St. John man who was arrested for robbery last spring.

– Two suicides were also listed on the blotter in late August. 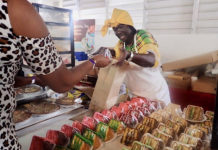