The third installment of the Symposium of Art Music from the Caribbean was held April 4-6 at the Conservatorio de Música de Puerto Rico (CMPR) in San Juan, P.R. The conservatory hosted the event as part of its annual Symposium of Music Research, now in its fifth year. For this third Symposium of Art Music, the event adopted its new name: Puentes Caribeños (Caribbean Bridges). The goal of the event’s organizers and participants is to hold it, with its new name, bi-annually at alternating locations throughout the Caribbean.

The symposium began in 2013, conceived by Dr. Christine Gangelhoff from what was then the College of the Bahamas (now the University of The Bahamas), as the International Symposium on Composers of African and Afro-Caribbean Descent. It brought together musicians, composers, scholars and students to engage with the topic of Caribbean art music.

This symposium drew participants both local and international. It was continued in November 2014 at the University of Trinidad and Tobago (UTT), organized by UTT lecturer Adam Walters, and followed the same format with the same goals.

Puentes Caribeños focused on strengthening bonds between composers, performers, artists and scholars throughout the Caribbean and its diaspora, and with specialists from outside the region. The three-day event featured a mix of scholarly presentations and topical discussions as well as opportunities to network and hear performances of relevant musical works.

The performance by C Force included several works composed specifically for members of the ensemble: “Bahamas Island Suite,” composed by trio member Christian Justilien; “Sonate à Christine,” composed for flutist Christine Gangelhoff by Haitian composer Julio Racine; and “Where the Sand Meets the Ocean,” by symposium organizer Dr. Carlos Carrillo Cotto. The performance of “Sonate à Christine” was the premiere of all three movements of the work.

Cotto’s work was composed for C Force earlier this year as part of his residency as international visiting scholar at the University of The Bahamas (UB). His residency and original composition were completed in conjunction with UB’s Colour of Harmony, a collaboration between the university’s visual art and music departments.

The theme of the event was the sea, which served as inspiration for the composer and artists. Cotto’s composition was first performed on March 22 at UB and accompanied by the projection of artwork from prominent Bahamian artist Lilian Blades. The premiere of the complete work took place at Puentes Caribeños, with Adam Walters on horn and conch shell joining C Force in the opening welcome concert for the symposium.

The symposium was capped by an outdoor evening concert by Flambo Combo, a student ensemble from Bertha C. Boschulte Middle School on St. Thomas. Flambo Combo specializes in quelbe, the local traditional music of the Virgin Islands. The concert ended in a jam session, with several of the participating musicians and composers joining Flambo Combo onstage.

University of The Bahamas Faculty Trio C Force thanks the Charitable Arts Foundation for its generous support.

Videos can be found on the following youtube playlist:
https://www.youtube.com/watch?v=RLESJqBG4Sg&list=PLHuUax1xB3tQFmOAUI-rMUmryKCLro7AV 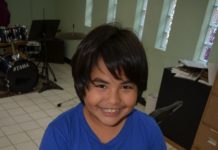 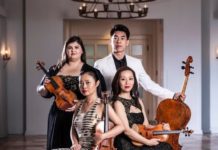 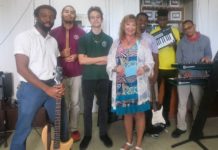