While the invasive lionfish has inspired hundreds of search and destroy missions in Virgin Islands waters and off the East Coast of the U.S., it has also attracted the attention of artisans and inventors outside the regions.

This holiday season, the classy Gump’s catalogue features several pages of marine-themed Christmas tree ornaments. Besides the bejeweled turtle, the golden starfish and the multi-colored glittery seahorse, you can buy, for a mere $28, a blown glass red and white lionfish, imported from Poland.

On a more serious note is the announcement earlier this year of efforts to develop a sort of underwater robot that could be used to electrocute lionfish at depths that are hard or impossible for human divers to reach.

The idea was floated in national media this summer, including an article in the Washington Post and a video for the PBS website.

Controlled by a person in a boat, the robot would trap the fish between two metal plates and then zap it by running electrical current between the plates. Theoretically, the lionfish would have no fear of the device because the species, native to Indo-Pacific waters, now roams unchallenged in parts of the Atlantic and the Caribbean where it has no known predator.

Deep water diver Frank Cummings, a V.I. representative of the Caribbean Oceanic Restoration and Education Foundation who has been leading lionfish control efforts off St. John for several years, is taking a wait-and-see attitude toward the potential new approach.

“I have seen a video of them using it, of them trying to use it,” Cummings said. “They need to perfect how to remove the fish” and work out a lot of other details.

According to the Post story, the proposed robotic technology is the brainchild of Colin Angle, chief executive of the iRobot Company (builders of the automated Roomba vacuum,) and his wife Erika Ebbel Angle, a biochemist and executive director of the group Science for Scientists. The pair established a non-profit called Robots in Service of the Environment, or RISE.

Voice and email messages left for them at RISE over the last two weeks were returned Monday by Matt Lloyd, who described himself as a volunteer with RISE and the director of communications for iRobot.

Lloyd stressed that the killer robot is still in the development stage and added that it “requires a lot of research and development.” So far, tests have been conducted only in tanks. Lloyd could not say when or where it would be tested in the sea.

The Post story, published in September, said RISE executive director John Rizzi was hopeful then that a fully developed model would be in the ocean by the end of the year. Monday Lloyd declined to say whether that timetable was still in place.

“We haven’t released any further information,” he said, but then added “we’re absolutely shooting to have something we can talk about by the end of the year or by the first quarter of 2017.”

RISE is actively pursuing grants from federal, state and local governments as well as from private environmental groups to fund the project, Lloyd said.

The robot is the latest in a series of efforts to eradicate the invasive lionfish, or at least to keep it in check and prevent it from destroying the fragile ecological balance of ocean reefs. Attempts to train other marine life (most notably sharks) to become lionfish predators have been futile so far. Hopes to create a consumer market for the fish and thus encourage widespread commercial fishing were dampened by research that showed it can carry the ciguatera toxin.

To date, the volunteer search and destroy missions undertaken by divers have been the most successful, though that success still is limited.

“I was using Goggle Earth and marine charts to find habitat they like,” he said. “They really like a ledge that they can go underneath.”

But while he was cobbling together a search area, the National Oceanic and Atmospheric Administration has been using radar to map the ocean floor “for years,” he said. “Just recently they’ve made this data available.” And that has made the hunt much easier.

In fact, Cummings said, he located an area about five miles off St. John’s South Shore. It’s about a mile long and it was loaded with lionfish.

He took two teams out to the area soon after it was discovered and they found and captured and/or killed 126 lionfish in a day. The next week, teams returned and destroyed another 48 lionfish. The following week, divers killed another 48.

All of the fish were at least 10 inches, which, he said, means they were all capable of producing or fertilizing eggs.

“I feel like we made a major dent into the breeding population,” Cummings said. “St. John is not a healthy place for a lionfish.” 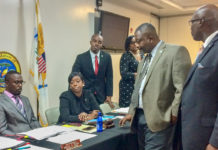