St. Thomas Sourcethe art of publishing
More
HomeNewsLocal newsNHC Expects System to Be Tropical Storm When It Reaches V.I. this...

NHC Expects System to Be Tropical Storm When It Reaches V.I. this Weekend 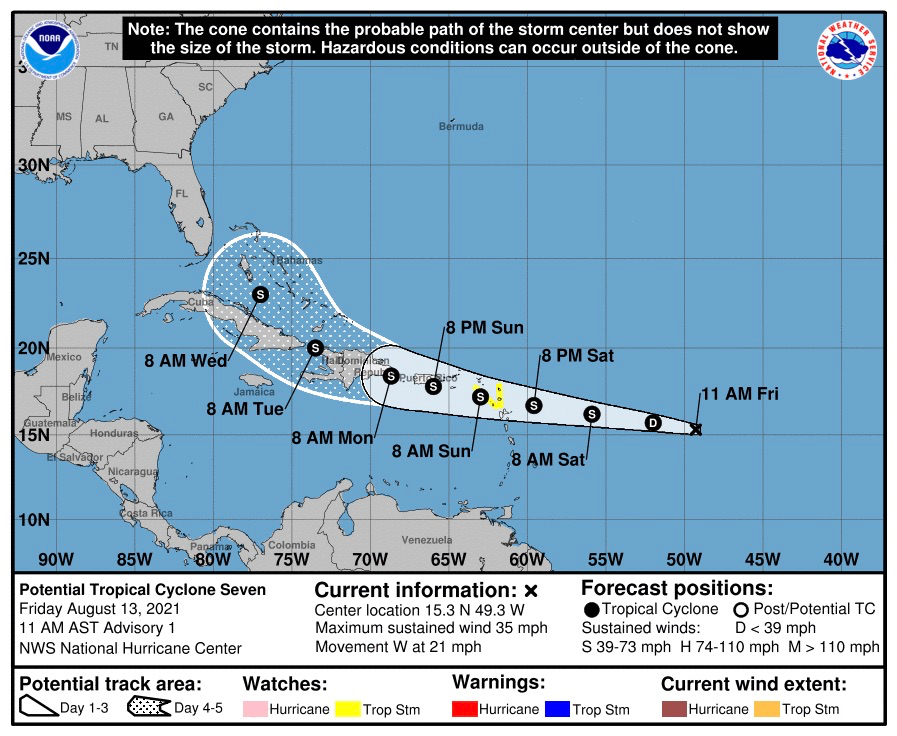 The U.S. Virgin Islands and Puerto Rico are monitoring a system, now known as Potential Tropical Cyclone 7, which the National Hurricane center forecast will be at tropical storm strength when it passes through the territory this weekend.

According to the NHC’s 11 a.m. Friday update, the disturbance was centered near latitude 15.3 north, longitude 49.3 west., and was moving toward the west at almost 21 mph. This general motion with a gradual decrease in forward speed is expected into early next week, the NHC said.

Maximum sustained winds are near 35 mph with higher gusts. Gradual strengthening is forecast during the next couple of days, and the disturbance is expected to become a tropical depression Friday night and a tropical storm by Saturday.

The agency warned that the system is bringing heavy rainfall that might produce areas of scattered flash flooding over the northern Leeward Islands. There also is a risk of wind and rainfall impacts in portions of Hispaniola, the Turks and Caicos Islands, the southeastern Bahamas and Cuba next week, the NHC added.

The U.S. Coast Guard has already set Port Condition WHISKEY at 11 a.m. on Thursday for all maritime ports in the U.S. Virgin Islands and Puerto Rico.

Facebook
Twitter
Pinterest
Email
Previous article“The Extinction” and “Gazing Beyond” Poems By Filippo Cassinelli
Next articleV.I. Bureau of Internal Revenue’s Nisky Office to Close Until Further Notice Due to COVID-19.