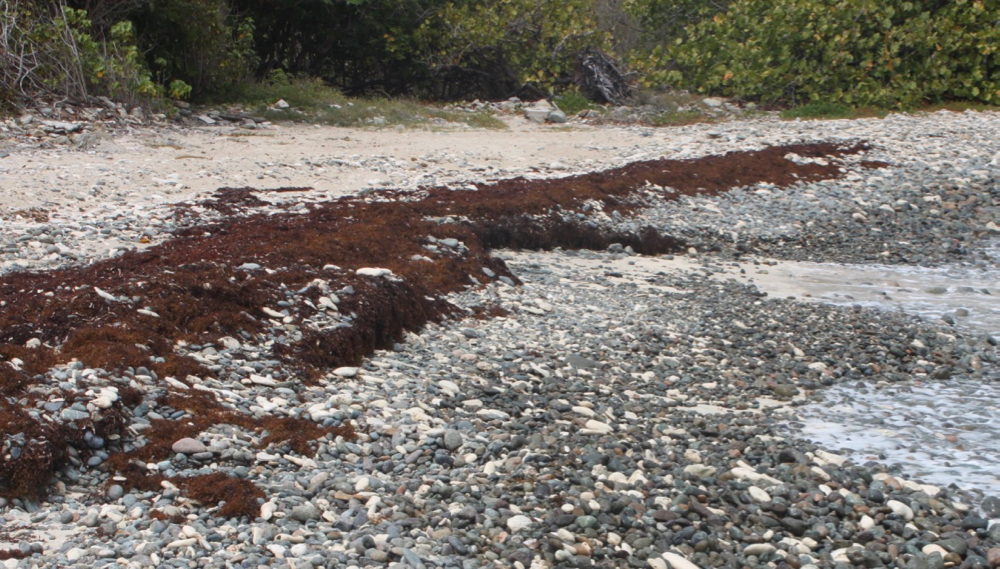 As the floating mats of brown seaweed known as sargassum continue to swamp Caribbean beaches summer after summer, the search is widening for a way to turn a nuisance into a gift.

Take a few minutes and look online. Someone, somewhere, is advocating processing sargassum into cosmetics, sunscreen, nutritional supplements, hair treatments, biofuel, paper, shoes, bricks, livestock feed and more. One of the most popular ideas for a sargassum product is fertilizer.

In the Virgin Islands, some farmers use raw sargassum cleared from shoreline areas to spread on their crops, Agriculture Commissioner Positive Nelson said. The department is not involved in those efforts, nor is it involved in research on sargassum, he said, because it does not have the necessary resources for the work.

International experiments and commercial ventures around mulch, compost and fertilizer began while the Sargasso Sea, which encompasses Bermuda at its western edge, was still the primary source of occasional drifting clumps of seaweed in the Atlantic and Caribbean.

That was well before 2011 when the “golden tides” of sargassum that have become an annual phenomenon in Mexico and throughout the Caribbean first appeared. More recently, satellite imagery tracked the Great Atlantic Sargassum Belt – the largest algae bloom ever known, estimated by NASA to weigh 20 million tons in 2018 – that stretches between the west coast of Africa and the Gulf of Mexico.

University of the Virgin Islands researcher Edwin Cruz Rivera said the ideal way to handle thick blankets of sargassum that wash up on shore, clogging beaches, rotting, smelling and generally causing a nightmare for tourist destinations like the Virgin Islands, would be to get the seaweed back into the ocean before it and the sea creatures it carries decompose. But clearly, he said, “that’s not a practical solution.”

So, “the best way to get rid of it is to find a product” that can be made from sargassum, he said.

Listing a few of the ideas currently being tested, Cruz Rivera said, “There is potential for all of these things to happen,” but “you have to be careful … you don’t want to end up with a bigger or a different problem” than the one you are trying to solve.

By way of example, he cited the case of a freshwater lake in Egypt dating to the time of the pharaohs, more than two millennia ago. Over the past 500 years, he said, the surrounding area has been heavily farmed and that agricultural activity gradually added salt to the land, which found its way into the water. It’s now a saltwater lake; of the 11 species of fish known to inhabit it in ancient times, only tilapia survives.

Fertilizer tends to salinize the soil, he explained.

“There’s no better way to do that.” Besides, he said, sargassum contains arsenic in higher levels than he believes are safe. High concentrations can be poisonous. For all that, he advises against using unprocessed sargassum on plants.

Even if sargassum-based fertilizer is safe, Cruz Rivera is not convinced it would be an economically feasible product for the territory.

“Maybe there’s the technology,” he said. But is there a market? What would be the cost of manufacture and where is the demand in a territory with relatively little agricultural land or activity? Perhaps an even more important consideration is whether sargassum has enough nutrients to compete against fertilizers already on the market.

“People think it’s a lot easier than it is” to turn raw material into a commercial product, he said. There are many factors involved and research is needed.

Cruz Rivera has gotten a little grant money to study various facets of sargassum. Currently, he’s examining the role currents play in determining where sargassum lands and why it may inundate one beach and skip another nearby completely. He is also trying to get funding to research sargassum fertilizer and the possibility of using it to produce feed for sheep.

But he said the U.S. government has not been focused on sargassum research, and he’s been largely frustrated in getting funding. In contrast, the United Nations and many other countries, including France, are investing heavily in sargassum studies.

This is not the only region seeing an increase in floating seaweed, he said. He cites two things as the major drivers of the change, both of them attributed to human activity: a dramatic increase in runoff caused by overdevelopment and carrying extra nutrients into the ocean (“You’re feeding this thing”) and the increase in sea surface temperatures which is a part of climate change. There are other factors, he said, such as over-fishing, which has left fewer fish to nibble away seaweed, but the first two are his prime suspects.

Things could be worse.

“We have not been slammed as hard” as some other parts of the Caribbean, Cruz Rivera said.

But they are bad enough. In recent years, V.I. hoteliers have reported spending thousands of dollars clearing beaches of sargassum.

So far this year the V.I. Waste Management Authority has received about 340 cubic yards of sargassum, according to WMA spokeswoman Charmin Springer, and the season has barely started. She said the authority does not have figures for 2020.

Property owners who want to clear sargassum from the beachfront (primarily hotels) are supposed to get a letter from the Department of Planning and Natural Resources allowing the removal.

According to copies of sample letters, the property owner must notify the Coastal Zone Management arm of DPNR 72 hours in advance of removal and the department’s division of Fish and Wildlife must do a walk-through of the area to ensure no endangered species will be impacted. Removal of sargassum from the water, before it hits the shore, is prohibited.

DPNR is “looking into” getting grant money to “possibly” assist private sector owners with clean-up, according to information supplied by Jamal Nielsen, the department’s media relations coordinator. It is also working on establishing more formal guidance.

“Currently there are no regulations for handling sargassum,” said Springer in an email response to questions. “[H]owever, because of the gases it produces it is not burned.

“The VIWMA will continue to receive and house the sargassum in a segregated area of its landfills until another environmentally safe option becomes available.”

VIDOH Reassures Public About Infant Formula Availability in the Territory

Graduation season has come to the Virgin Islands for 2022. For educators, friends, and family, it’s a time to celebrate the aspirations of the young as they move from high school, technical education, or continuing education and prepare for what comes next. But at the Virgin Islands Montessori School & Peter Gruber International Academy on St. Thomas, there’s one special occasion that comes before the day to march in cap and gown.

📸: Amir Ottley signs up for Howard University and studies in mechanical engineering. (Photo by Judi Shimel)