Before Sen. Donna Frett-Gregory was removed from her position as head of the Finance Committee Wednesday, all three of her pieces of legislation brought before the Senate were approved.

“I was able to have four bills pro forma and one resolution, and they were all approved. This is the work I did. Of course senators signed on afterwards, but this is the work I have been doing since I’ve been in office and I have so much more work to do. I cannot allow things like this (majority rearrangement) to distract me,” Frett-Gregory said.

Frett-Gregory said though the three bills were approved she is not sure what happened to an amendment on a medical assistance bill she worked on alongside other senators who are still a part of the majority. She said Sen. Allison DeGazon and Sen. Javan James worked on the amendment, which was meant to address concerns regarding the health centers, and it was supposed to come to the floor.

“In the Finance Committee we made adjustments. We did an amendment and were bringing those amendments to the floor, but I don’t know what happened there either. At that point I saw that things were really going south and we did not have a majority,” Frett-Gregory said.

Frett-Gregory proffered a bill to increase GERS funds from $7 million to $10 million, and it passed unanimously among the 14 present senators before the rearrangement of majority seats occurred.

Another bill Frett-Gregory proffered that was also accepted by the majority was a bill that requires financial transparency from government agencies in the V.I. and provides public access to documents.

Another bill from Frett-Gregory, to authorize the government to obtain a revolving line of credit for up to $80 million, was approved unanimously. The bill states the funds will be used to “pay service providers, pending the receipt and disbursement of funds, and to pay other outstanding obligations.”

“One of our challenges is the government’s ability to make timely payments for reasons tied to the reimbursement process. So I put together that piece of legislation working with my team and working with the majority on it,” Frett-Gregory said.

Two other pieces of legislation were presented Wednesday and were passed unanimously by the former majority of 14 senators. A time extension was granted to the Cannabis Advisory Board. And law prohibiting veterans with taxi medallions from selling them at auction to a person without veteran status was approved.

Frett-Gregory said she was proud of the work that was accomplished and isn’t going to let Wednesday evening’s Senate reorganization halt her progress.

“I guess I am not a politician, perhaps I am just too focused on the people’s business. There is much to do here. You know in the V.I. we have a number of issues. We have issues with our health care system, our educational system, with our waste, issues with WAPA. That’s what we really should be working on,” Frett-Gregory said. 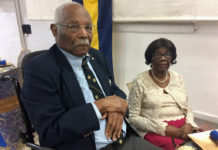