The certificate was given to Clifford Joseph, VIFS service director, during the V.I. Committee of the ESG&R’s annual St. Croix Employer and Volunteer Awards and Recognition Dinner held at the Buccaneer.

An officer in the V.I. Army National Guard (VING), 1st Lt. Kai Callwood, nominated the fire department because of the support Joseph and his leadership team gave to him and the other guardsmen working for the department.

As he expressed his thanks, Joseph accepted the challenge by the dinner’s guest speaker, Wilma A. Lewis, chief judge, District Court of the Virgin Islands.

“Thank you to the committee for the work that they do,” said Joseph. “After listening to the judge tonight, I guess I will have to start practicing to say a little more thank you’s at work. Sometimes a 10 percent ratio starts to give you frustration, and you begin to look at everyone the same. But I have to remember I have 90 percent good, so the thank you will come easier going forward.”

Thank you, was conveyed by Callwood when he nominated Joseph for the Patriot Award for the support he received. Joseph received that award on March 27, 2018.

“I have been employed with the Virgin Islands Fire Service for two years,” said Callwood. “During this time, I have spent 19 months on military orders. Upon my return, the director and leadership welcomed me back with open arms and ensured I was willing to work.”

“While on military orders, Joseph’s deputy chiefs kept an open line of communication with me,” said Callwood. “They ensured my equipment was serviceable prior to returning and developed a training objective for me upon my return. During the times on military orders, they supported me financially as well with military leave pay.”

Director Joseph is in charge of hundreds of firefighters and support staff in the territory. According to Callwood, over 15 personnel under his command are service members who are called to military duty typically on the same days and time.

“He and his subordinate leadership have always made necessary accommodations that allowed us to fulfill our military duties without any problems — but with a lot of support,” said Callwood.

That support was demonstrated after two category five hurricanes had struck the territory in September 2017.

“In the wake of hurricanes Irma and Maria, the department supported [my] fulfilling military duties due to the shortage of [military] officers in the assigned area,” said Callwood.

“The leadership supported the soldiers conducting point-of-distribution to thousands of citizens over the course of a month. During that time, they also performed firefighter, debris removal, search and extraction duties alongside soldiers, and other emergency personnel.”

“Even in the time of disaster, the department allowed critical service members to perform those duties and work with each other, in support,” he said. 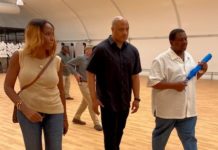 Delegate to Congress Hosts Chairman of Transportation and Infrastructure Committee