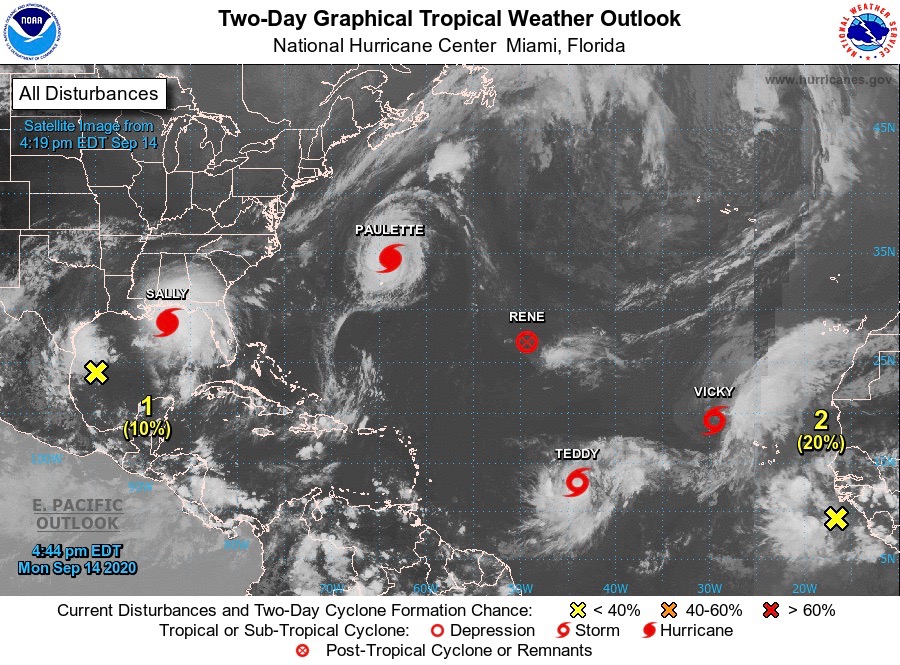 The Atlantic basin is crowded with activity, as five tropical weather systems in varying stages of development dot the ocean, along with another pair of systems in the Gulf of Mexico.

The storm holding the attention of Virgin Islanders is Tropical Storm Teddy, which is intensifying and is expected to become a hurricane Tuesday.

However, though it will be a major hurricane with sustained winds of 115 miles per hour, on its current track Teddy is expected to pass more than 500 miles northeast of the territory.

According to the 5 p.m. Monday update from the National Hurricane Center, the center of the storm was near 13 degrees North, 44 degrees West, or about 1,170 miles east of the Lesser Antilles, with top winds of 50 miles per hour. Earlier today, the storm assumed a due west track at 14 miles per hour.

Maximum winds have increased to near 50 miles per hour with high gusts and steady intensification is forecast for the next several days. Tropical-storm-force winds extend outward up to 70 miles from the center. Teddy could be a major hurricane by Thursday.

Teddy will initially be steered to the west and then west-northwest by a deep-layer ridge located over the central Atlantic. As the ridge shifts more to the east, Teddy will assume a northwest track. Overall forecast models have shifted the track to the left since this morning and the hurricane center’s projected track has been adjusted in a likewise manner.

Elsewhere in the Tropics
An elongated area of low pressure located 330 miles west-northwest of the Cape Verde Islands has evolved into Tropical Depression 21 and is now Tropical Storm Vicky. It is producing an area of showers and thunderstorms while maintaining top winds of 35 miles per hour and tracking to the north at 6 miles per hour. The depression is expected to be short-lived as by Tuesday it is forecast to encounter strong upper-level winds and move over colder waters, conditions that will hinder continued development.

A tropical wave near the west coast of Africa is producing disorganized showers and thunderstorm activity. Environmental conditions appear to be conducive for the slow development of the system this week as the wave moves westward at about 10 miles per hour over the far eastern tropical Atlantic.

Hurricane Renee is expected to dissipate over the central Atlantic by Tuesday. Hurricane Paulette is moving north-northeast away from Bermuda, almost parallel to the U.S. east coast, but though it is expected to gain strength, the forecast suggests it will continue heading northeast, away from land.

To complete the picture, Disturbance 1 is expected to slowly gain strength before it moves ashore to the south-southwest and drops rain over central Mexico.

The only big question among the storms is Hurricane Sally in the gulf. Saturday and Sunday the forecasts were unanimous in thinking it would strike eastern Louisiana, the New Orleans area, as a Category 2 hurricane. But the track began shifting to the east Sunday night and now, though New Orleans could receive a strong storm surge, most of the attention is on Alabama, where the storm is slowly lumbering towards landfall by Wednesday and is expected to be a Category 3 hurricane by the time it reaches land.