Board of Directors, St. Thomas-St. John Chamber of Commerce
December 24, 2019
Facebook
Twitter
Pinterest
Email
The St. Thomas-St. John Chamber of Commerce (the “Chamber”) has been monitoring the Water and Power Authority  (“WAPA”) situation over the past six months and has had the opportunity to meet with the utility and its advisors on numerous occasions to assess their short-term and long-range plans to improve service reliability and reduce costs to residents.  WAPA’s 3-5 year plan includes many laudable initiatives, largely funded by FEMA and HUD, that will improve efficiency and reliability of the grid such as shifting to underground power distribution, installing composite poles on all islands, continuing to shift to more efficient power generation using propane as the primary fuel, and installing over 60MW of solar capacity in the Territory. All of these initiatives are expected to reduce the long-term power cost to residents but will take time to implement and realize the benefits.

The Chamber supports these efforts but remains concerned that cash flow constraints and the high debt load put WAPA in a very fragile and untenable financial position that may jeopardize its ability to implement these critical improvements.

Given the Virgin Islands Public Service Commission’s (‘PSC”) recent decision to not approve WAPA’s requested Base Rate increase, the Chamber felt compelled to share its perspective on the prudent path forward. As an advocate of business interests in the Territory, the Chamber fully recognizes that high utility costs and unreliability of the electrical grid have adversely affected both the business community and all our residents. But this problem was not created overnight, nor was it caused solely by the Hurricanes. Years of underinvestment, questionable decision making, and band-aide fixes have led us to where we are today. But looking retrospectively to place blame is not going to solve these problems, so instead we offer this perspective on the path forward:

This was the essence of the recent Base Rate increase and LEAC decrease request to the PSC, which the PSC de-coupled and approved only the LEAC decrease portion. The Chamber recognizes that the Base Rate and LEAC are two separate and distinct revenue streams with different purposes, but we believe that it is necessary for the PSC to consider adjustments to these two rates collectively because the utility relies on the combined cash flow from these two sources to fund operations.

The Base Rate is intended to cover all operating expenses and debt service, and ideally produce a surplus of cash flow each year to cover capital improvement items. In order to access the capital markets (to re-finance the expensive VITOL debt for instance) WAPA must be able to show that its Base Rate revenues are sufficient to cover its operating expenses and debt service. The LEAC on the other hand is designed to fluctuate with the price of fuel and should not generate a cash surplus or deficit.

But because WAPA’s Base revenues have fallen sharply due to the impact of hurricanes, grid migration, and other operating problems over the past few years, the base rate revenue is no longer high enough to fund operations. And since so much of the utility’s expenses are “fixed” in nature, WAPA has been unable to cut costs commensurate with the revenue declines. At the same time, however, raw fuel costs have come down, which has provided WAPA some cushion on the LEAC side which has helped to bridge the Base Rate gap.

Therefore, the PSC decision to reduce the LEAC while keeping the Base Rate stable will have perilous and untenable cash flow impacts on WAPA’s ability to move forward and will force the utility to revert back to burning diesel fuel since WAPA’s propane supplier, VITOL, has already provided notice that it will no longer supply WAPA with propane due to its projected inability to pay its bills.

The table below shows a pro-forma analysis of the impact to rate payers of shifting from propone to diesel as a fuel source. As can be seen, total monthly fuel costs and the corresponding LEAC rate would increase by 122% from $0.1640/KWHr to $0.3652/KWHr. 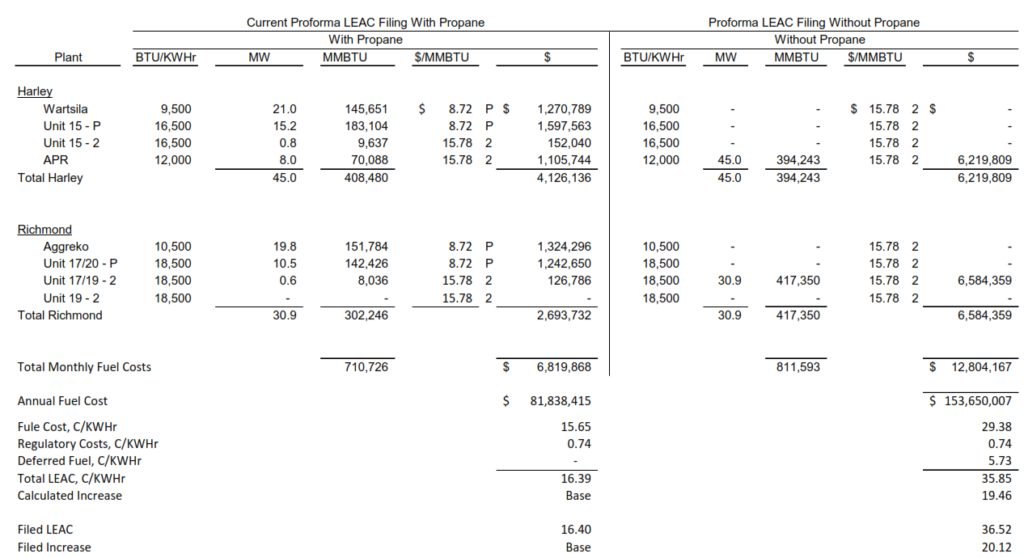 It is not surprising that VITOL choose to stop supplying WAPA propane after witnessing the PSC’s failure to address this issue and approve the base rate increase last week.  VITOL has not received an infrastructure payment in eighteen months and the base rate increase was a critical component of WAPA’s ability to pay vendors and signal to the financial markets that it could sustain operations.

There are some in our community who find it unconscionable that the VITOL conversion to propane went over budget by $73,000,000. But no matter why or how this project went so far over budget, the reality is that burning propane is currently saving the Territory $72,000,000 annually in fuel costs before VITOL infrastructure and Operating and Maintenance costs, with net savings of approximately $32,000,000 after accounting for these costs.  Two years of burning propane at today’s cost of propane covers the cost overruns.

It is the Chamber’s belief that the long-term viability of WAPA is essential to the overall economy of the Virgin Islands and the lives of our citizens. If we do not have reliable and affordable power, nothing else will work here and the Territory will fall into a deep depression. The Chamber therefore urges the following actions:

The Chamber also recommends that the Government immediately impose more oversight and control over WAPA’s Board, including selecting qualified individuals, who can ensure that the utility is being operated as efficiently as possible– thereby reducing costs to all its customers. In addition, the Government and WAPA are urged to move expeditiously to implement the 3-5 Year plan to create a lower cost and more reliable power grid for the Territory.

The Chamber’s recommendations above keep overall customer rates stable in the near-term but provide the opportunity for WAPA to implement its turn-around plan for long-term success.

Sen. Kenneth Gittens responds to an open forum by the V.I. Department of Education regarding the preparations that have been made for the reopening of the public schools.
Read more
Open forum

The Department of Education issues a statement in response to Senator Kenneth L. Gittens' opinion piece published on March 1 regarding the return to in-person learning in the St. Croix District.
Read more
Open forum

Open forum: A Plan of Action Is Needed to Find Missing Seniors

Jelani Ritter wants changes to the way authorities search for missing seniors. She proposes the enforcement of the law that created a Silver Alert System.
Read more