The following are the second poll results as of Oct. 30 from VI Tech Stack, a UVI RTPark tax break recipient company, in collaboration with the University of the Virgin Islands Institute for Leadership and Organizational Effectiveness.

The poll was conducted by V.I. Tech Stack and the UVI Institute for Leadership and Organizational Effectiveness. John Yob of V.I. Tech Stack presented and explained the poll and its results. Yob is a St. John transplant from Michigan who runs a company receiving Economic Development Commission tax breaks. He has a long history of activity in the Republican Party in Michigan and worked on multiple campaigns. Yob is author of: “Chaos: The Outsider’s Guide to a Contested Republican National Convention” which analyzes the ins and outs of the formal convention rules and how a candidate could use those processes in the context of the 2016 presidential election.

Traditionally, every election season, UVI facilitates multiple electoral polls up until the general election. This year, ILOE partnered with VI Tech Stack, which conducted two polls. These polls were administered to random persons in the territory via online and phone interviews and interactive automated phone calls. The information was then compiled, providing the electoral poll results for the gubernatorial and senatorial races. 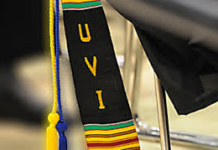 UVI Bulletin Board for March