In a discussion about what he considered a money- and pleasure-cursed generation of American young people, the comedian Mort Sahl once observed “Remember in the ’60s when we told you if you kept using drugs your kids would be mutants.” Nobody listened, he added, and look at what happened.

In recent years, Bill Kossler of The Source has repeatedly warned that if the leaders of the U.S. Virgin Islands did not get the territory’s fiscal house in order, a social, political and economic calamity was going to result. Nobody listened. At least not so far.

In 2007, the year before the greatest financial crisis since the Great Depression, Chuck Prince, CEO of Citigroup said, “When the music stops, things will get complicated. But as long as the music is playing, you’ve got to get up and dance. We’re still dancing.”

In the Virgin Islands, leaders are still dancing. And, although we live in a time of great uncertainty, going over the territory’s fiscal cliff in the near future, as Kossler has repeatedly warned, is a near certainty. 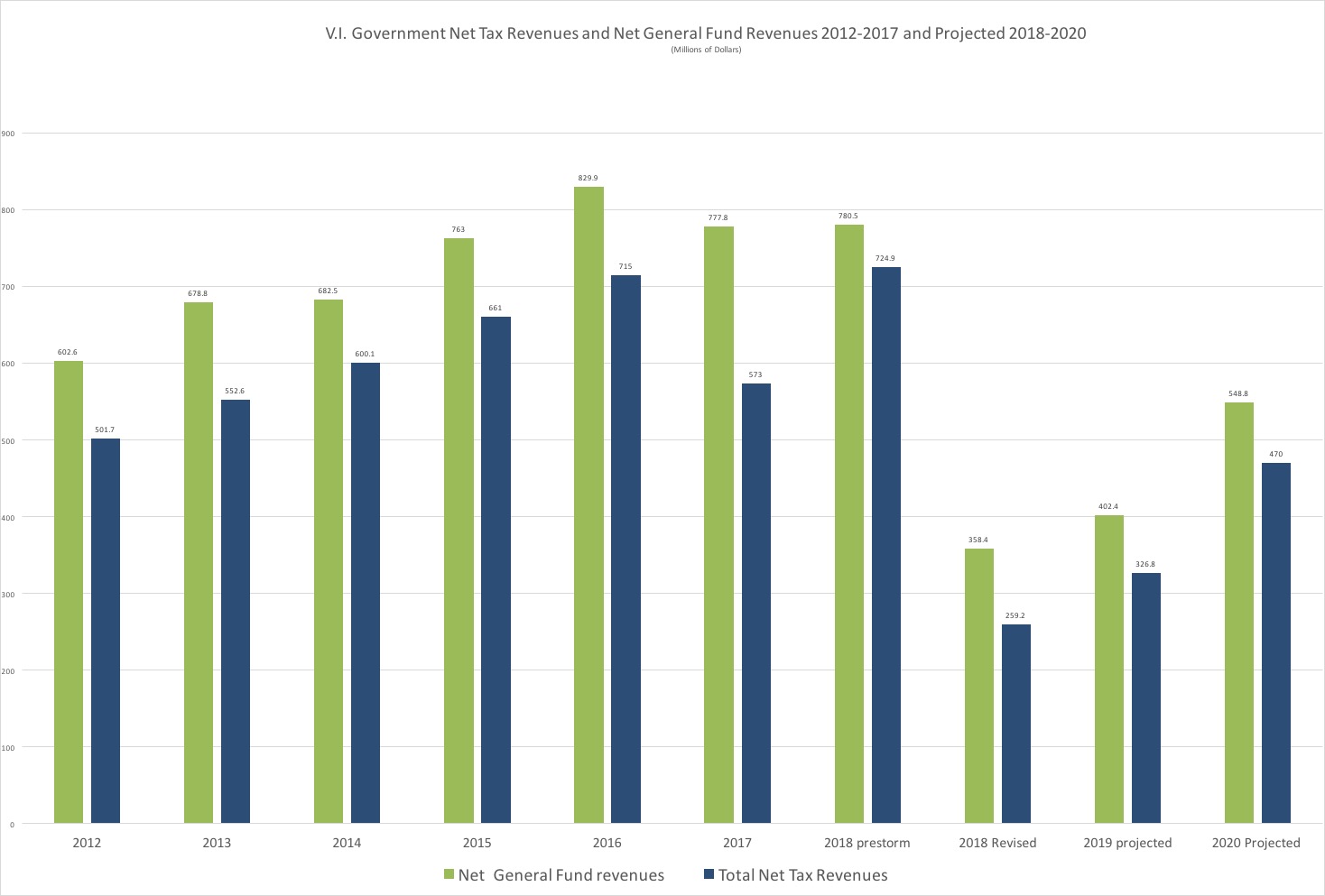 Maybe the best glimpse of the USVI’s ominous future comes from the movies, specifically from the cinematic masterpiece “Bambi Meets Godzilla.” Two of the great things about this film are the clarity of its powerful message and the fact that it only lasts sixty seconds (available on YouTube.) In the film, an oblivious Bambi (the Virgin Islands) is grazing among the flowers as peaceful music plays. This goes on until the heart-wrenching climax when Godzilla’s gigantic foot (modern predatory capitalism) suddenly comes down and crushes Bambi to death. The End.

Bambi never knew what hit him, and, despite the many warnings, neither will the Virgin Islands leadership. They will keep dancing until the music stops, and then the finger pointing will start. Compared to others, however, these leaders’ personal punishments will be mild: irrelevance.

There is an instructive history here. In New York in the mid-1970s, the bankrupt city’s leaders woke up one day to find out that the music had stopped, that they had lost control and that they had become largely irrelevant. All of a sudden, those who had prided themselves – because they were big shots – on not returning other people’s phone calls, couldn’t get their own calls returned. The pigeon had become the statue. This is the history that is likely to repeat itself in the territory.

In New York, those consequences were mild compared to the impact on “ordinary” New Yorkers, those who would bear the brunt of the newly imposed austerity. New York became a filthy, crime-ridden, dispirited place with steep declines in every public service and large numbers of residents heading for the exits. Today, Greece, and, to a lesser extent, Puerto Rico, are even more relevant examples of the consequences of fiscal crises and mismanagement. Puerto Rico might be even more relevant but its drama is still playing out.

Though larger, Greece bears a number of similarities to the USVI. It is a corrupt, tax-avoiding country dominated by what is known as “clientism,” the distribution of public goods to insiders and favored groups. In certain ways, the government is its own client, taking a cut from just about everything for itself. And like the USVI, Greeks have had an exaggerated sense of their place in the world, and, therefore, a refusal to believe that the worst could happen to them, or an inability to understand of how little control they may have over their own fate.

So what happened? When Greece effectively went bankrupt, it was “rescued” by the European Union, the IMF and the European Central Bank. The recipe for this kind of salvation can be summed up in a single word: austerity. Austerity was essential in the overseers’ eyes – as it will be in the case of the Virgin Islands – to avoid the “moral hazard” that would accompany the hated word “bailout.” The Greeks had to pay for their many sins. The formula imposed on Greece called for indiscriminate cuts in services, reduced wages, lost pensions and other benefits, new taxes, weakened labor laws and privatizations.

The justifications for these actions were Greece’s reckless borrowing and spending, bloated government, massive tax avoidance and corruption. It was hard to dispute these facts. But – a huge “but” – they did not automatically lead to austerity. And it is worth noting that these conditions were imposed on the Greeks by the liberal European Union, not by a far right, corporate-controlled, corrupt and predatory American administration.

So what happened in Greece? The crisis led to a state of emergency and what can only be described as an economic war. The results included a shrinking economy, rapidly increasing unemployment, the pauperization of the middle class, the demonization of labor unions and activist groups, increased social tensions and the empowerment of the extreme right as the inevitable search for scapegoats began. For young Greeks, there was a clear message: there is no future in this country. A Greek minister summed things up in this way: “It is of no importance what is just or unjust. We are in a state of war.”

Because everyone kept dancing, none of these outcomes were predicted before the crisis. Far more important, it is difficult to see a path back to a brighter future, particularly as the hemorrhaging of talent and hope continue years after the crisis. New York City in the end was saved because those at the top realized that it would not be a good thing for the world’s financial capital to die, especially since its leaders lived there. Even then, great damage had been done as people with a range of self-serving agendas saw their opportunities and took them, while many others suffered, most notably a generation of young people.

For the Virgin Islands, the cracks are clearly visible: dire warnings from ratings agencies, the collapsing pension system, failure to honor non-profit agency contracts, and, like Bambi, an obliviousness to the imminence of the threat.

The immediate need is for a plan that faces reality, one that seeks the least-worst outcomes and avoids all of the horrors of the Greek situation, as well as what is unfolding in Puerto Rico.

All of the potential answers will be found in two places: Charlotte Amalie and Washington. At home in the territory, the clock is running out, and the most important thing that can be done is to get the USVI’s house in order, to take away as many of the “moral hazard” arguments as possible. This is critical because every one of these arguments is going to be used against the territory. The tradeoff – if one is possible – is a large infusion and investment of cash in exchange for some loss of local control. To believe that a happy outcome is possible without these tradeoffs is to become Bambi happily grazing among the flowers.

Next Facing Reality: Poverty, Inequality and Their Social Consequences. Americans continue to believe that we are the richest country on earth, which is true from a GDP standpoint. But the United States is now the most unequal society in the developed world, has the lowest levels of social mobility and lags in almost every indicator of social wellbeing. What is the impact of these conditions in the Virgin Islands, and where does the territory stand among its peers in the region? Part Four will explore these questions and ask the most pressing one: where is the path to a healthier future?

As executive director of the Federal Region II Children’s Resource Center, Frank Schneiger’s organization trained a generation of V.I. children’s services workers. He subsequently founded the St. Thomas/St. John Youth MultiService Center. In the past two decades, he has served as planning consultant numerous Virgin Islands organizations and has been a columnist for the Virgin Islands Source. He is the author of two books, “The Arc,” under the pen name of Roberto Vincent, and “The Purge: The Future As History in the Age of Trump,” available on Amazon books.

By the time U.S. officials documented the population of the country’s newly acquired U.S. Virgin Islands territory, it had been declining for generations.

📸: Population had begun a shift towards cities like Christiansted in the late 1800s and early 1900s. (U.S. Census Bureau photo)

In a discussion about what he considered a money- and pleasure-cursed generation of American young people, the comedian Mort Sahl once observed "Remember in the '60s when we told you if you kept using drugs your kids would be mutants." Nobody listened, he added, and look at what happened. In recent years, Bill Kossler of The Source has repeatedly warned that if the leaders of the U.S. Virgin Islands did not get the territory's fiscal house in order, a social, political and economic calamity was going to result. Nobody listened. At least not so far. In 2007, the year before the greatest financial crisis since the Great Depression, Chuck Prince, CEO of Citigroup said, "When the music stops, things will get complicated. But as long as the music is playing, you've got to get up and dance. We're still dancing." In the Virgin Islands, leaders are still dancing. And, although we live in a time of great uncertainty, going over the territory's fiscal cliff in the near future, as Kossler has repeatedly warned, is a near certainty.