Virgin Islanders have kept the number of the COVID infections comparatively low, local experts told a virtual audience Thursday, adding that the vaccines and contact tracing will help eliminate the pandemic.

The comments were made during the first in a series of Galiber Medical Lectures hosted by the University of the Virgin Islands.

“The more quickly we can conduct the contact tracing the better we can control the disease spread,” said the territory’s epidemiologist Dr. Esther Ellis.

When the coronavirus first began spreading around the world, experts predicted the U.S. Virgin Islands would be hit with from 3,000 to 5,000 cases of COVID-19. But as of Friday, the number of confirmed cases in the territory has been slightly below that – 2,398 confirmed cases of the disease, although the actual number of cases is probably higher.

The World Health Organization declared COVID-19 an international emergency at the end of January 2019. The USVI Health Department and others started watching out for the virus in January 2019, Elis said.

The territory’s first case was confirmed Mar. 13, 2020, and Gov. Albert Bryan, Jr. declared a state of emergency the same day. Since then, the territory has sheltered in place, social distanced, worn masks, observed business closures along with other precautions when the number of cases increased.

As of Friday, almost half of the territory’s population – 41,587 people – have been tested. Ellis said the V.I. has never experienced a shortage of tests and anyone can get a test and results in 24 hours. The territory has suffered 24 deaths, but there has never been more than 25 hospitalizations at a time. There are currently 91 active cases in the territory.

The epidemiologist said the Virgin Islands has the lowest COVID case rate in the U.S. and territories and the third lowest death rate.

One of the difficulties in containing the virus is the number of asymptomatic cases. As many as 25 percent (22 percent locally) of the victims show no symptoms, Ellis said.

“Sometimes they can be super spreaders because they are not sick so they’re not really changing their behavior.”

Another problem is contact tracing, which is complicated and takes a lot of time. Contacts are monitored by a series of questions daily through text, email or phone calls.

“The more quickly we can conduct the contact tracing the better we can control the disease spread,” Ellis said.

The highest risk factor for individuals is 15 minutes of contact with someone who is positive for the virus, whether 15 or more minutes all at once, or five minutes three times during a day, she said. Those over the age of 80 are the population with the highest risk.

Ellis said there have been three cases discovered in schools, but after testing everyone at those schools, no new cases were uncovered – a testimony to good masking and social distancing practices.

Next, Dr. Tai Hunte-Ceasar talked about the pathology and disease management of the virus. The most common symptoms are a cough and fever. But victims also may have a headache, sore throat, diarrhea, nausea, trouble breathing and, in some cases, the loss of taste and smell.

She said a few patients display necrotic lesions, or what is commonly called “COVID toes” or fingers, where there is redness around the nails and bumps on the skin. Half of the people who are asymptomatic will show signs of the disease with X-rays and/or laboratory tests. The lungs show abnormalities.

People who have a higher risk of contracting the disease are the elderly and those with underlying conditions such as diabetes, kidney and heart issues, high blood pressure, a weak immune system and obesity.

About 80 percent of the people who contract the disease have mild cases, but about 14 percent will suffer severe illness, with hypoxia and extensive breathing problems. Five percent of the cases are critical and involve multi-system shock requiring hospitalization and intubation.

Recovery time is usually two weeks to three months, depending on the severity of the virus, Hunte-Ceasar said. Sometimes, symptoms linger for several months without active infection, a so-called post COVID syndrome.

“Recovery depends on the severity of your illness and risk factors that were previously listed including co-morbid factors,” she said. “As Dr. Ellis said, people can test positive PCR up to 12 weeks but this is not indicative of infection. The people are not contagious.”

There are a variety of treatments, depending on how mild or severe the disease is, according to the professionals. Vitamins C and D, zinc, monoclonal antibodies and plasma can help outpatients with mild cases. Inpatients with moderate to severe virus can be treated with ventilation, oxygen, steroids, Remdesivir and immunomodulators. However, immunomodulators with Remdesivir are not available in the territory.

The Food and Drug Administration has granted emergency-use authorization to two vaccines in the United States, and a third os prepared to apply for authorization. Emergency-use does not grant outright approval, but temporary approval indicating the treatments may be effective but will continue to be studied. Approval will be given when all of the data is analyzed, Hunte-Ceasar said.

Both the Pfizer-BioNTech and Moderna vaccines were conditionally approved in December. Pfizer requires an ultra cold storage (minus 60 to minus 80 degrees) and a booster in 21 days. Moderna can be stored had slightly higher temperatures with a booster required in 28 days. The Pfizer vaccine is 95 percent effective and Moderna is 94 percent.

“Remember the vaccine does not mean you do not become infected, but if you do become infected you more than likely will not have any symptoms or progress to severe disease or dying. So we all need to continue to mask and continue to social distance,” Hunte-Caesar concluded.

The third speaker was psychologist Dana Hamilton, who talked about how the coronavirus impacts mental health.

In the United States, 53 percent of adults report anxiety, frustration, boredom and unspecified fears due to the pandemic. More than one-third reported an increase in anxiety and depressive symptoms in June and July versus one in ten in January 2019. Substance and alcohol use and thoughts of suicide are elevated as well.

Online sales of alcohol have skyrocketed so people are using it to cope with the stress of COVID-19, Hamilton said, and there was an increase in opioid use. Health professionals also report an increase in alcohol usage, which might result in more substance use disorders in the future.

According to Hamilton, adolescents and university students also report stress, anxiety and depression due to the pandemic. Some students are more stressed returning to school but seeing friends helps some. Lockdown also affects mental health and the longer it is, the worse the impact. 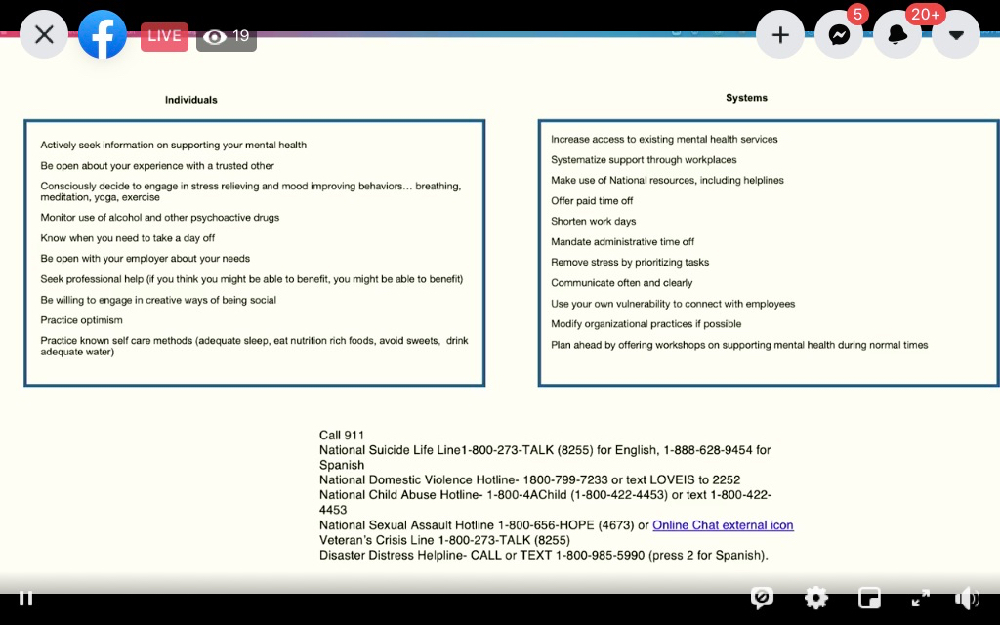 Coral Bay residents were astonished to see a waterspout develop and touch down in close proximity to dozens of boats anchored in Coral Bay harbor around 4 p.m. Tuesday.
Read more