A reader recently registered outrage at the “sewage” pooling in Bovoni on the road by the Clinton E. Phipps Racetrack, causing accidents and polluting the nearby “pristine” estuary known as Mangrove Lagoon on St. Thomas’ east end.

The Source found that a V.I. Waste Management Authority contractor is currently creating a 200-feet bypass while the 2,000-feet of backed-up sewer line between the Nadir Bridge and the racetrack area is being cleared and reconstructed.

The Authority issued a statement on July 17 outlining the measures being taken to correct the problems.

VIWMA spokesperson Melody Rames clarified Wednesday there is no human waste backing out of the sewers, rather it is the normal wastewater from showers and kitchen sinks clogged by all manner of items clumped together by used grease and motor oil illegally dumped into a system designed for used water.

When residents and businesses dump cooking oil, motor oil and grease down the sink or into the sewers – without regard for the law, “It overwhelms the pumps,” according to Rames, “and clogs up the whole system,” which causes the manhole or holes in the area to back up.

“Hair, clumps of string; we even found a mop head,” Rames said. “It happens because the businesses don’t want to pay the trash haulers to pick up their used cooking oil.” Nor are some residents and businesses willing to properly dispose of their automotive waste.

VIWMA regularly issues statements warning residents to comply with the law and explaining in great detail the fines and processes.

Rames sent an email outlining what oils cause the serious sewer, and even home drainage, problems and how to deal and not deal with used oil.

All cooking oils that are disposed of improperly can cause problems in the sewer system. These include frying oil, salad oil, meat drippings, bacon fat and greasy leftovers.

The email reads, “Cooking grease coats pipelines similar to the way that fatty foods clog human arteries. The grease clings to the inside of the pipelines, eventually causing complete blockages.”

As for the current state of the Bovoni overflow, the grease slicks on the roadway caused by illegal dumping are another serious problem.

The Source reader said he has seen several car accidents or near accidents in the area as drivers swerve to avoid going through the muck. But there’s more to it than the sudden tacking.

“The road is greasy,” said Rames. “It causes cars to slide all over the place.”

Rames said the contractor expects the remedial work to be finished in about a week.

As for the reader’s concern about the “pristine” lagoon, the area is way past its virginal days. A 2018 report found copper, arsenic, zinc, tributyltin and even DDT in it. The last two have been banned in the United States for years.

Kristin Grimes, assistant research professor at the University of the Virgin Islands, surveyed the lagoon last December with four scientists from United States Geological Survey. Grimes, a mangrove expert who has done several restoration projects in the Virgin Islands, said when the 2018 report was issued, she was mystified. A prior report released in 2010 showed no trace of DDT. The scientists speculated while viewing the groves damaged by the back-to-back Category 5 hurricanes of 2017, that the sudden appearance of the banned insecticide eight years later might have been due to massive erosion from the flooding during Hurricane Maria.

The tributyltin, also banned in the states, is used as a biocide in bottom paint on the hulls of ocean-going vessels. It contaminates marine invertebrates and is poisonous to the humans who eat them.

Grimes said last winter during the USGS scientists’ visit it probably comes in on British Virgin Islands vessels. It is not banned in the neighboring islands.

Even with all of that, Grimes said Wednesday the mangroves are still extremely important.

The runoff from the gushing manhole “is another stressor, in an already over-stressed system,” she said.

However, it is not very dramatic compared to what a storm does to the fragile but important protective trees and the wetlands, but the runoff eats away at it. “We lose it in little bites instead,” Grimes said.

“They are doing so much good,” Grimes said. 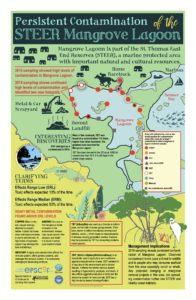 A national drill to test the delivery, receipt and redistribution of the Pfizer COVID-19 vaccine started on Monday and will continue through the week, testing coordination between the two hubs, one on St. Thomas and one on St. Croix, that have the required ultra-cold refrigeration storage, officials announced on Monday. #visource #usvi #news ... See MoreSee Less

A national drill to test the delivery, receipt and redistribution of the Pfizer COVID-19 vaccine started on Monday, officials announced.
View on Facebook
·Share