Two men were injured by gunshots, one of them fatally, in a midnight shooting Saturday, Dec. 7, in Hospital Ground, the V.I. Police Department reported.

The victim was identified by next of kin as 32-year-old Cedric Henry. According to the Source list, it was the 13th homicide on St. Thomas since the beginning of the year, the 35th in the territory. (The Source homicide list is based on police reports but, unlike the VIPD list and those in other media, does not include suicides or vehicular homicides.)

According to the police report, at 12:03 a.m. Saturday the 911 call center received a call from a concerned citizen who said there had been numerous shots fired in Hospital Ground. Officers were then notified that two gunshot victims were transported to the Roy Lester Schneider Regional Medical Center via private vehicle.

Officers traveled to the hospital where they were advised that one of the victims succumbed to his injuries. The other victim is being treated for his injuries.

The deceased was identified Henry.

Tips sent to Crime Stoppers which result in the resolution of a case can qualify the caller for an anonymous cash reward. 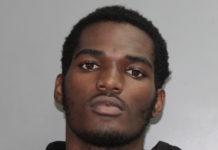