A lawyer representing the St. Thomas nightclub manager charged with sex trafficking is asking a federal magistrate to release her client from detention pending trial. Defendant Yohanna Gonzalez-McFarlane has been behind bars since being arrested on Aug. 7.

McFarlane is charged with alien smuggling and harboring for financial gain, inducing travel in interstate commerce for prostitution and other offenses. At a preliminary hearing held Aug. 12, U.S. Magistrate Ruth Miller ordered the defendant held without bond.

The Aug. 7 arrest was the result of an eight-month investigation that began when an illegal migrant from Venezuela contacted relatives back home and said she feared for her life after taking a job at the Underground Nightclub in Estate Mariendahl. When an FBI agent working undercover visited the club and contacted the complainant, he was stopped from leaving the premises with the woman by McFarlane. The agent and the complainant were allowed to leave after McFarlane received a $200 payment for someone posing as a customer to go off the property on a date.

In court papers, the agent said that based on his experience and training, a “date” was a term used to describe an arrangement for commercial sex.

Miller gave several reasons why she denied bail for the defendant, including McFarlane’s own status as an undocumented immigrant living in St. Thomas. That made the nightclub operator a serious flight risk and lessened the chances the defendant would appear at future court hearings.

The magistrate also cited McFarlane’s lack of stable employment and unverified background information on the defendant.

In the motion filed Monday, Turnbull filled in some of the details. She acknowledged her client is undocumented and is currently the subject of a pending removal action by the Immigration and Naturalization Service. But Turnbull said McFarlane is married to a U.S. citizen on St. Thomas and has two minor children who also live on the island with her.

Turnbull said that, although McFarlane does not have legal status to live in the U.S. Virgin Islands, being undocumented by itself is not enough to declare her a serious flight risk.

Turnbull added in her motion that the court failed to define what constituted a serious flight risk.

“Mrs. McFarlane has family and friends willing to provide financial sureties in the amount of $7,000 to ensure her appearance at trial,” the defense attorney said. “GPS monitoring provides a mechanism for 24-hour monitoring of Mrs. McFarlane. Such monitoring restricts a defendant’s movement within a predetermined radius by the Office of Probation.”

For those and other reasons, the defense petitioned the court to reconsider its previous order, Turnbull said.

Although she made one appearance in court since her arrest, McFarlane has not yet been scheduled for arraignment. A similar delay was seen earlier this year in the case of George Soufan, an 18-year-old Syrian national who turned himself over to police on St. Thomas and asked for political asylum after entering the territory with help from smugglers.

Soufan was removed to Florida by the Immigration and placed in a Florida detention center until his Virgin Islands lawyer obtained a court order demanding Soufan’s return to face prosecution in the jurisdiction where he was charged. 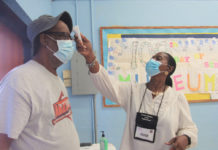 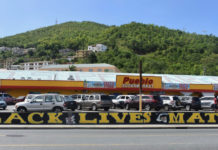