Update: Dorian Intensifies, Should Be Cat 1 When It Passes by USVI 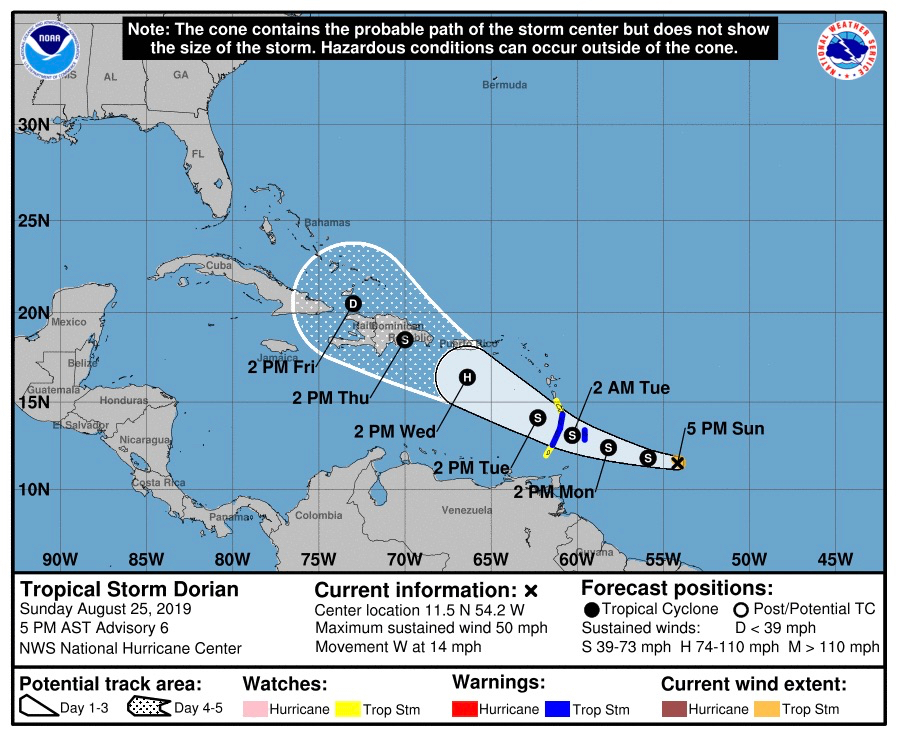 Based on the latest advisory, Tropical Storm Dorian is expected to make its closest point of approach to the Virgin Islands at 10 a.m. Wednesday when the storm center passes 137 miles to the south-southwest of St. Croix. At that time, Dorian is expected to be a minimum Category One hurricane with top winds of 75 miles per hour.

As Dorian approached the Caribbean Sunday, a tropical storm warning was issued for Barbados, and a tropical storm watch is in effect for St. Lucia, St. Vincent, and the Grenadines. According to the 11 a.m. Sunday update from the National Hurricane Center, additional watches and warnings for the U.S. Virgin Islands and other portions of the Lesser Antilles could be required later in the day.

At the 11 a.m. update, the center of Dorian was about 906 miles east-southeast of St. Croix with top winds of 40 miles per hour, and it was on a track to the west at 14 miles per hour, according to the NHC. Satellite photos indicate there is a small area of showers and thundershowers with a curved band visible on the northern side of the storm.

Environmental conditions around Dorian are marginally favorable for continued development. There is a significant south-southwesterly wind shear occurring just to the west of the storm. In addition, Dorian is surrounded by dry air. If the wind shear remains low near the center of Dorian, then the dry air will not likely be ingested in the storm, leading to slow, but steady strengthening. However, if the wind shear continues to increase near Dorian, then dry air would likely be pushed into the storm leading to a weakening of the system.

Dorian will either remain near the same or strengthen a little over the next couple of days, but over the long haul, the tropical storm is not likely to survive for long in the eastern Caribbean. The combination of dry air, a little more wind shear, and possible land interaction will lead to a quick weakening of the system. The wind shear is increasing as a result of an upper level low pressure system forecast, which will drop southward towards the central Caribbean.

Editor’s note: This story was updated from the original noon posting to contain information from the hurricane center’s 6 p.m. update.

Reflections of an Evolving Elder: U.N. Peace Day Might Offer a Framework to Achieve It

The purpose of this day, when it was first established in 1981, was to “strengthen the ideals of peace both within and among all nations and people.”
Read more
Local news

The night-blooming cereus teases us as it opens in the darkened sky after nightfall – closing by dawn and wilting in the light of day. Many of these beauties grow in the wild, while other are planted in outdoor tropical gardens.
Read more
Local news

John Michael Burgos, the man who was apprehended in February during a foot chase through Estate Tutu has pleaded guilty to drug and weapons charges.
Read more

After making do with several temporary locations over the last three years, St. Croix senators and their staff moved into their new gleaming white, three-story, 20,000-square-foot home next to the Federal Courthouse on North Shore Road this week. #visource #usvi #news ... See MoreSee Less

After making do with several temporary locations over the last three years, St. Croix senators and their staff moved into their new gleaming white, three-story, 20,000-square-foot home on North Shore
View on Facebook
·Share

Now can you pave the ROADS? Do something for us this time!

Very nice now how about the hospital.