“All morning we saw birds and bait, so we knew [we] were in the right spot, but we didn’t get any bites,” said Browne. Then, around 12:30 p.m., our captain saw two birds circling overhead. We made our way over to them. All of a sudden, one of the lines went off. Jeremy (Austin) was first to the rod. The rest of us started to clear the other lines away so they wouldn’t get tangled, and while doing that, the port line went off. I was closest and grabbed it. That one ended up being the winning nearly 30-pounder.”

Browne’s first place fish was about 25-pounds shy of the 55-plus-pound criteria to win the tournament’s ultimate prize – $25,000 in cash.

Prizes were awarded to anglers catching the five largest dolphins.

The Best Boat award went to Lekker, with the top collective catch weight of 74.72-pounds of dolphin fish.

Several boats donated fish to the host Virgin Islands Game Fishing Club, where this was the featured entrée at the Awards Dinner held May 20.

Professionals from the Department of Planning and Natural Resources Fish & Wildlife Division conducted the official weigh-in.

The tournament’s beautiful wooden trophies were crafted by My Brother’s Workshop. 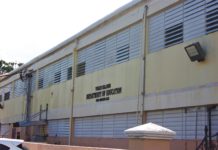