Health Care Slow to Catch Up with Aging Population

This is the sixth in a series of articles about health care in the Virgin Islands. 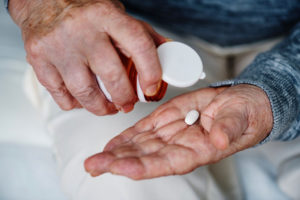 Although its senior population is growing rapidly, the U.S. Virgin Islands is lagging when it comes to specialized health care for the elderly.

There’s no obvious reason to think the 2020 census won’t show the trend continuing.

It has been happening across the U.S. – as well as in many other countries – for years. The U.S. Census Bureau predicts that by the year 2030, the national average of U.S. residents over the age of 65 will be 21 percent of the total U.S. population.

Census projections are that by 2035, there will be more U.S. residents over the age of 65 than there are children under the age of 18. That is the result of lowering fertility rates coupled with longer life expectancy.

All this, the Census Bureau website suggests, has impacts on health care, in-home caregiving and assisted living facilities.

But maybe not yet. At least not in the territory.

Although clearly many physicians treat patients who are elderly, an on-line search unearthed no doctors of geriatrics practicing in the U.S. Virgin Islands. The list of registered providers on the website for V.I. Equicare, the territory’s largest independent preferred provider organization, is empty in the section “geriatric medicine.”

The V.I. Health Department has a myriad of divisions devoted to specialized services, but none specifically for seniors. An inquiry to the department about elder care was met with the suggestion that the Source check with the Department of Human Services.

Human Services does run a few social programs for low-income elderly residents, including some that touch on aspects related to health care. It offers pharmaceutical assistance funding for individuals whose income is less than $18,000 annually. It runs a Family Care Giver Support program of emotional and financial support for people who are primary caregivers for family members over the age of 60.

It also administers a Homemaker Services Program to provide help with housekeeping chores, personal care and light meal preparation for individuals who are over age 60 and confined to home.

The department website says, “There is a much greater demand for the services of this program than the program can provide.”

There is also a greater demand for nursing home care than the government has been able to provide. Human Services runs two nursing homes in the territory, the Herbert Grigg Home on St. Croix and the Queen Louise Home for the Aged on St. Thomas. Both are aging structures and typically have long waiting lists. The only privately-run nursing home, Seaview Nursing Facility, lost its Medicare and Medicaid certifications and was forced to curtail operations.

There are a few government and privately run senior living housing options in the territory, including the well-known Lucinda Millin Home and Ebenezer Gardens, but they do not have the 24-hour medical staff necessary to be classified as nursing homes. Rather they cater to seniors who are fundamentally healthy and cable of living independently with little assistance.

Dr. Linda Callwood is well acquainted with government programs for aging Virgin Islanders, particularly on St. Thomas where she operates a medical practice she calls “Physician Home Visits.” She is also familiar with the most common health issues facing seniors.

“I’m not a geriatrician by any means,” Callwood said. “I’m an internist.” But she does treat many patients who are elderly. She sees some at her office and she visits some in their homes.

In addition to chronic conditions such as diabetes, high blood pressure and heart disease, elderly patients are more likely to suffer from memory loss and various types of dementia, Callwood noted. And they may become frail. Fractures are common and can mean the permanent loss of mobility for people of advanced age.

“Don’t fall – that’s the last thing I say” at the end of a patient visit, Callwood said. She advises her patients to de-clutter their homes, pick up rugs and move electrical cords so they are less likely to trip. She also recommends some patients install hand rails and stair lifts if they can afford them.

“All of us are supposed to exercise,” she said, and that goes for elderly people too. She noted that the University of the Virgin Islands has some exercise programs geared to seniors. Another rule of thumb that applies to most of her patients: Get 30 minutes of sunlight each day, to boost Vitamin D levels.

Like many health care providers, Callwood finds many of her patients like traditional home remedies, but she is cautious about their use.

“I understand herbal medication, and there’s a place for that,” she said. “I know for a fact that they do work.”

Problems come in with the dosage and with side effects.

Molasses is good for anemia, but it is bad for sugar levels, so can harm someone with diabetes. Lemon grass may be great for soothing your nerves, “but it’s also a blood thinner,” Callwood said. Too much of it, especially in combination with a prescription blood thinner, could lead to intestinal bleed.

“What’s the dosage you should use?” she said. How is it different for a man or a woman? Do you drink weak or strong lemon grass tea? How many cups a day? Are you taking iron tablets at the same time you are ingesting molasses?

Herbal remedies are good, but “they need to be regulated more closely,” Callwood said. “People need to be educated on the side effects we’re seeing.”

Callwood’s practice has made her a bit of an advocate for senior care.

“We need to do better planning,” she said.

“We” includes the community in general, the government in particular, and the patients themselves.

A person who leads an unhealthy life in youth is laying the groundwork for problems later in life. For instance, Callwood said, uncontrolled high blood pressure for years can lead to infarcts, which are small, localized areas of dead tissue.

“That’s the major one we’re seeing,” she said.

Infarcts can have detrimental effects on a variety of areas, including the brain, lung, heart, bones and limbs.

“A lot of people have not planned for aging,” Callwood observed.

For the best chance of health into old age, she recommends residents of all ages get regular medical care, control their weight, exercise regularly and generally maintain a healthy lifestyle.

It also pays to plan financially, she said. Typically, for instance, home health care can cost between $15 and $25 an hour.

The Virgin Islands tends to be a supportive community on a personal level, Callwood said, but family members, friends and neighbors can do only so much.

Callwood said she has partnered with government divisions in serving homebound patients, but both Health and Human Services “simply need to do better,” she said.

“Instead of waiting for someone to report a problem,” the government should be actively looking out for the vulnerable elderly and that means finding where they are living in the first place. “We need to know where our seniors are,” she said.

Once located, their needs can be assessed.

“We’re in dire need of additional support services,” she said. “If I write a prescription and there’s no one to pick it up, what good is that?”

While Callwood is focused on care for homebound individuals, she is also advocating for their placement in facilities.

“We continue to build senior homes but what we need are nursing homes,” she said. In general, “our seniors are not independent … We are just not a healthy community.”

A Day to See and Serve the Homeless

The height of Sunday’s total lunar eclipse occurred around 11:30 p.m., when the moon was in the deepest portion of the Earth’s shadow, giving it a reddish hue.

This is the sixth in a series of articles about health care in the Virgin Islands.