Jose Alfredo Rondon Castro, 40 and Juan Lorenzo Matias Peralta, 38, both of the Dominican Republic, Dionis Alexander Luis Gomez, 31, of Venezuela and Roman Perez Hernandez, 34, a national of both Argentina and the Dominican Republic, were also arrested Monday on criminal complaints charging each of them with illegal entry into the United States, Shappert added.

Todman, Castro, Peralta, Gomez and Hernandez all made their initial appearances before Magistrate Judge Ruth Miller and were detained pending further proceedings.

According to the complaint, Todman was stopped by U.S. Customs and Border Protection Air and Marine Operations in the North Haulover Bay area of St. John when agents observed him operating a vessel with no lights. After the boat was stopped, AMO agents observed four men besides Todman onboard and determined that they were not U.S. citizens.

If convicted of bringing aliens into the United States, Todman faces a sentence up to 10 years and a $250,000 fine. If convicted of illegal entry, Castro, Peralta, Gomez and Hernandez each face a maximum sentence of six months and a $5,000 fine.

The case is being investigated by Homeland Security Investigations and U.S. Customs and Border Protection Air and Marine Unit and prosecuted by Assistant U.S. Attorney Sigrid M. Tejo-Sprotte. 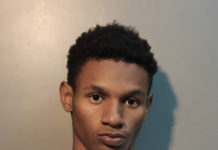