St. Thomas Sourcethe art of publishing
More
Home Source Picks The Bookworm: 'Once a Cop' Tells Two Stories from Both Sides of...

The Bookworm: ‘Once a Cop’ Tells Two Stories from Both Sides of the Law 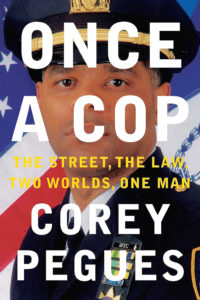 That’s allowed, you know. You can go in a different direction, pick something else, try another thing, have do-overs, or have two. Pencils come with erasers, few things are forever, and in “Once a Cop” by Cory Pegues, change may be good.

Born the second-youngest with four “much older” sisters, Cory Pegues grew up in a middle-class, mostly-black neighborhood in Queens, New York. Though his father was largely absent, Pegues basked in the affection of an extended family and he was secure, until his mother began moving her children from home to more-run-down home.

At age thirteen, Pegues knew they were poor; he “was going around with holes in my shoes…” when he was taken under the wing of an older boy who was well-regarded in the neighborhood, and who taught Pegues to peddle “loosies.”

The next step was even easier: he sold crack and joined a larger group of dealers, some “serious players” who made crazy money but thought little of killing someone for small reason. It didn’t take long for Pegues to know that he “needed an exit plan, and I needed to move on it fast.”

For him, the army “was perfect,” so he contacted a recruiter. Three weeks after he left for basic training, his old dealing grounds were raided.

The army, however, was a means to an end: Pegues knew that what he really wanted was to work for the NYPD. He tested, was approved, left the military, and tested again. He was a father twice over by that time, and he was determined to be a cop, though many departments then oozed with racism.

Still, Pegues persevered. He took on the worst assignments so he could study for higher positions. He climbed in the ranks, paying his dues and finding mentors to help him be the best policeman he could, to “protect and serve” the people in various precincts.

He made history, until the day he spoke “against the wrong people.”

“Once a Cop” seems like two books that were accidentally glued together in the same cover. One good, one meh.

In the beginning, you’ve got author Corey Pegues’ story of life in poverty and crime, which is wild, violent, and almost movie-like. That ultimately segues into Pegues-as-policeman, and is filled with names, numbers, and an undercurrent of anger.

It’s perhaps because of the rage in the latter half that the books’ first half is the more readable of the two and, though filled with harshness and profanity, more accessible. It feels engaged, while the story’s final part seems to be, surprisingly or not, more like a police report. This may leave readers with a sense of disappointment; it’s as if our race horse is taken away and replaced by a bad-tempered Shetland pony.

And yet, fans of this genre still might enjoy seeing both sides of the streets, as told by one man who’s lived them. Try “Once a Cop” and see what you think.

You can always change your mind.

Police officers responded to gunshots in the Brookman Road area on Wednesday after the 911 emergency call center was alerted at 11:06 a.m.
Read more
Organizations

In an effort to continue to be an informal education resource for the community, the Virgin Islands Children’s Museum is distributing the second phase of At Home Discovery Kits for families throughout the territory.
Read more
Source Picks

To date, Limetree has conducted more than 11,000 tests and reduced the positivity rate to less than 1 percent.
Read more