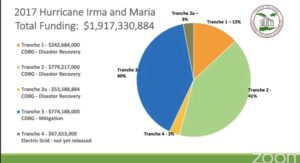 The V.I. Housing Finance Authority has $53 million to spend on recovery projects from the 2017 hurricanes that devastated the territory, and wants the public’s help in how to use it.

Agency officials will speak on radio station 103.5 FM for an hour Tuesday to discuss the spending, and will hold a virtual public hearing Wednesday on the VIHFA Facebook page.

During a virtual hearing Sept. 15, officials from the agency explained how citizens can be involved in this process as HFA prepares to make changes to how they plan to administer hurricane recovery money.

The deadline for public involvement is Oct. 3.

The amendment is focused on the $53 million the department received for unmet infrastructure needs and reallocation funding to carry out different priorities.

– The funds for disaster recovery get announced in separate allocations called tranches. This amendment is part of Tranche 2a. The tranches need to be approved by the U.S. Department of Housing and Urban Development and the department will issue a grant agreement before the money can be spent.

– The $53 million in Tranche 2a can be used for roads, shelters, waste management, water and sewer, and under special conditions power generation.

– The proposed budget has 57 percent of the funds available for infrastructure, 33 percent for housing, four percent for public services and facilities and 6 percent for economic revitalization.

– This amendment will separate facilities for public services, homes for the aged and shelters from regular housing, which they were included under in previous amendments.

– Disaster recovery is an ongoing process that began July 10, 2018, when the action plan was approved. An amendment was approved on March 1, 2019, and that process is underway.

The full breakdown of the plans can be found online at the VIHFA website.

The full video of the Sept. 15 hearing can be found on Facebook.

In a heated election season that will leave millions of Americans who are residents of U.S. territories on the sidelines because they don’t have the right to vote for president, two St. Thomas attorneys have joined a lawsuit seeking to redress that wrong.
Read more
Local news

Virtual activities to support the creation of a 20-year economic development plan will begin in a week, with officials saying on Tuesday that community buy-in is critical to move forward.
Read more
Local news

A new net metering program introduced this year by the Virgin Islands Energy Office creates an opportunity that will allow home generators to sell excess power to the V.I. Water and Power Authority.
Read more

A new net metering program introduced this year by the Virgin Islands Energy Office creates an opportunity will allow home generators to sell excess power to the Water and Power Authority, but one vendor said it also might provide incentives for people to install batteries and keep that power for themselves. #visource #usvi #news ... See MoreSee Less

A new net metering program introduced this year by the Virgin Islands Energy Office creates an opportunity will allow home generators to sell excess power to the Water and Power Authority.
View on Facebook
·Share