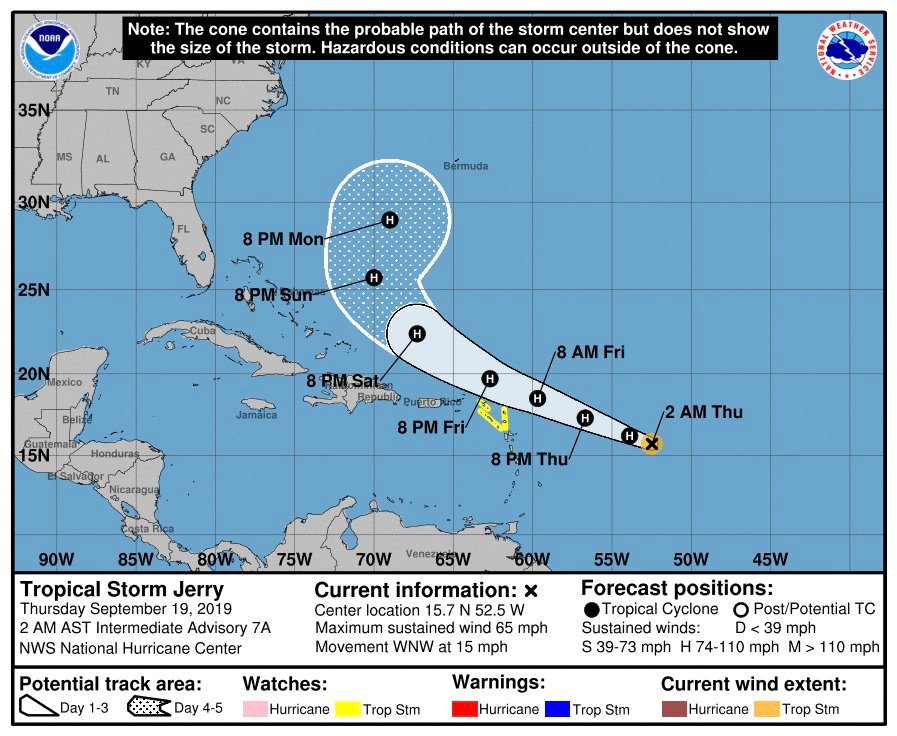 Jerry, the storm system approaching the Caribbean, has grown into a Category 1 hurricane, according to the National Hurricane Center.

On its projected path, Hurricane Jerry should pass about 140 miles north-northeast of St. John at 3 a.m. Saturday morning. At that time, Jerry is expected to still be Cat 1, with top winds of 75 miles per hour. The tropical storm force winds associated with Jerry will stay to the north of the Leeward Islands and the Virgin Islands. The main impacts will end up being ocean swells, some cloudiness, and a passing shower or two from Friday to Saturday. There are no watches or warnings for the Virgin Islands.

Still, the NHC cautioned, tropical-storm-force winds and locally heavy rainfall are possible, and tropical storm watches are in effect.

Satellite images indicate that the center of Jerry is on the northwestern side of the central dense overcast, near a very deep convective burst. An Air Force Hurricane Hunter plane that flew through the storm Thursday morning found a central pressure of 988 mb and maximum sustained winds near 75 mph with higher gusts.

Jerry is the fourth hurricane of the 2019 Atlantic hurricane season.

The center of Hurricane Jerry was located near latitude 16.8 North, longitude 54.4 West. Jerry is moving toward the west-northwest near 16 mph.