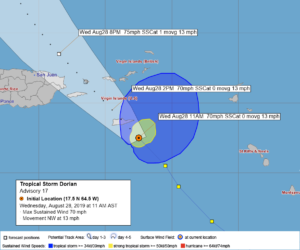 Dorian has been upgraded to a Category One Hurricane as it nears St. Thomas with top winds of 75 miles per hour.

St. Thomas’ Cyril E. King Airport has been closed for the day due to the storm.

Hurricane Dorian is tracking to the northwest at 13 miles per hour, and a Hurricane Warning remains posted for the Virgin Islands. There have been numerous reports of hurricane-force winds on St. Thomas over the past couple of hours. A weather station just south of St. Thomas recently reported sustained winds of 82 miles per hour, with a gust to 111 miles per hour

At 2:45 an alert announced sustained winds on St. Thomas of 82 mph with gusts to 111, suggesting that Dorian became a hurricane as it moved over the island.

Large tree branches had begun to accumulate in roadways blocking passage and the heavy gusting rains showed no signs of diminishing at of 3 p.m.

Seaports are closed until further notice.

Vitran bus service is cancelled until further notice. A curfew is in effect until 6 a.m. Thursday