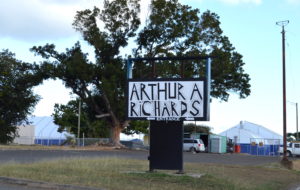 Juanita Gardine Elementary School and the shared modular campus of Arthur A. Richards Jr. High/Alexander Henderson Elementary all closed early Tuesday due to vandalism over the Memorial Day weekend, according to the Department of Education.

WAPA engineers were called in to assess the damage and have determined that repairs would take several hours.

At Juanita Gardine, 16 classrooms, as well as the school’s cafeteria and kitchen, were burglarized and ransacked. Police forensic units are investigating the scene.

In a statement, acting Education Commissioner Racquel Berry-Benjamin expressed her disappointment with the news of the vandalism.

“Stealing from and vandalizing our local schools is something we should all be concerned with as a community,” she said.

“This robs our children of important opportunities they should have, with the costs and time that go into replacing materials and equipment,” she said.

According to the Education Department, both schools are expected to resume regular hours of operation on Wednesday.

On Sunday, police and fire officials responded to a blaze in the cafetorium at the vacant Charles H. Emanuel Elementary School building in St. Croix. No injuries were reported in that case.

Keeping our community informed is our top priority.
If you have a news tip to share, please call or text us at 340-228-8784.
Facebook
Twitter
Pinterest
Email
Previous article
Man Shot Monday Morning on St. Thomas
Next article
First IMG USVI Tennis Cup Concludes on St. Croix