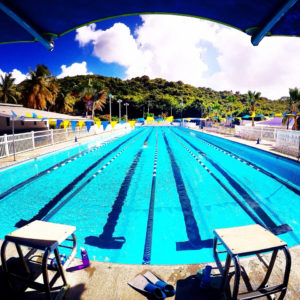 The U.S. Virgin Islands (ISV) swim team had a strong finish after day one of competition at the 2018 Central American and Caribbean (CAC) Games on Friday, ending with several athletes advancing to medal rounds and a new U.S. Virgin Islands record. The games are being held from July 19 through Aug. 3 in Baranquilla, Colombia.

Though they did not medal in their finals appearances, Frank Odlum, president of the USVI Swimming Federation, said he was very pleased with the team’s overall performance, especially since most swimmers dropped seconds off their best times.

“We tell the kids all the time that they’re racing themselves, so each one of them dropped time and made improvements,” Odlum said. ‘They just swam at the [Central American and Caribbean Amateur Swimming Confederation Championships] two weeks ago, so to drop time from just two weeks back—we’re very pleased with that.”

“It was a good start to the meet. I felt good in the water, so as the days go on I know it’ll be even better,” he said.

Matthew Mays, 19, made a lifetime best and broke his own Virgin Islands record in the men’s 200m butterfly with a time of 2:05.48 in his first heat. He said the team is used to long meets such as this and warming up, rolling out, and keeping your body in racing condition is key.

Webster Bozzo, 18, was proud to drop a second off his best time in the men’s 100m freestyle, with a time of 53.30, in his first CAC Games appearance.

“This is a first time big swim meet for me like this, so it was kind of nerve wrecking at first, but when I got out there, it was just amazing,” he said. “It’s kind of a once in a lifetime thing you get to do.”

Moving forward through the next few days of competition, Team ISV is ready and anxious to get in the pool, according to Odlum.

“Just the fact that they meet the qualifications to come, they don’t need any motivation. They train more than 10 hours a week. They are there every day except Sunday training [at home],” he said. “It’s easy. We don’t have to motivate them, we don’t have to coax them, they want to come.”

Individuals can follow the games and the status of Team ISV athletes competing at www.barranquilla2018.com