A long-period northerly swell will impact the islands through Wednesday and will bring choppy seas and increased rip current risks. A “High Rip Current Risk” is in effect until 6:00 a.m. AST Wednesday.

Additionally, A “High Surf Advisory” and a “Small Craft Advisory” for portions of Puerto Rico and the northern USVI beginning this evening until 6:00 a.m. AST on Wednesday. Read more here.

A weekly weather video update is available from the VI Source YouTube page.

Tuesday will be mostly sunny and dry, with the possibility of isolated showers. The high temperature will be approximately 88°F, with winds out of the east at about 15 to 17 mph, gusting up to 22 mph. The chance of rain today is 20%.

Tuesday night will be partly cloudy with isolated showers. The low temperature will be approximately 74°F, with winds out of the east-northeast at about 17 mph, gusting up to 22 mph. The chance of rain tonight is 20%.

Winds will predominantly be out of the east on Tuesday and Tuesday night at 10 to 15 knots. Seas will be 5 to 7 feet, with occasional 9-foot seas and a swell period of 12 seconds. The water temperature is approximately 82°F.

A long-period northerly swell will bring seas of up to 9+ feet to some locations and a high risk for rip currents.

A “High Rip Current Risk,” a “High Surf Advisory,” and a “Small Craft Advisory” are in effect for portions of Puerto Rico and the northern USVI until 6:00 a.m. AST on Wednesday. Read more here.

Rip Currents: There is a high chance for powerful rip currents across the islands, and a “High Rip Current Risk” is in effect. Swimmers and surfers should take extra precautions (and if caught in a rip current, swim parallel to the shore until you are outside of the pull of the current).

Marine Conditions: A long-period northerly swell will bring seas of up to 9+ feet to some locations. A “High Surf Advisory” and a “Small Craft Advisory” are in effect for portions of Puerto Rico and the northern USVI.

Tropical Activity: Tropical cyclones are not expected to impact the USVI within the next five days.

Tropical Details: The end of hurricane season is tomorrow, Wednesday, November 30, and no tropical systems threaten the USVI. There continues to be moisture in the southern Caribbean, including flooding rains in Trinidad and Tobago. However, this precipitation is not expected to affect us in the USVI, and the entire Caribbean region should begin to dry out soon.

We will continue to remain in a “La Niña” weather pattern, and with this weather pattern, there is a slightly increased chance for cyclone development, even outside of hurricane season. Any tropical weather updates will be posted here on the Source Weather Page. 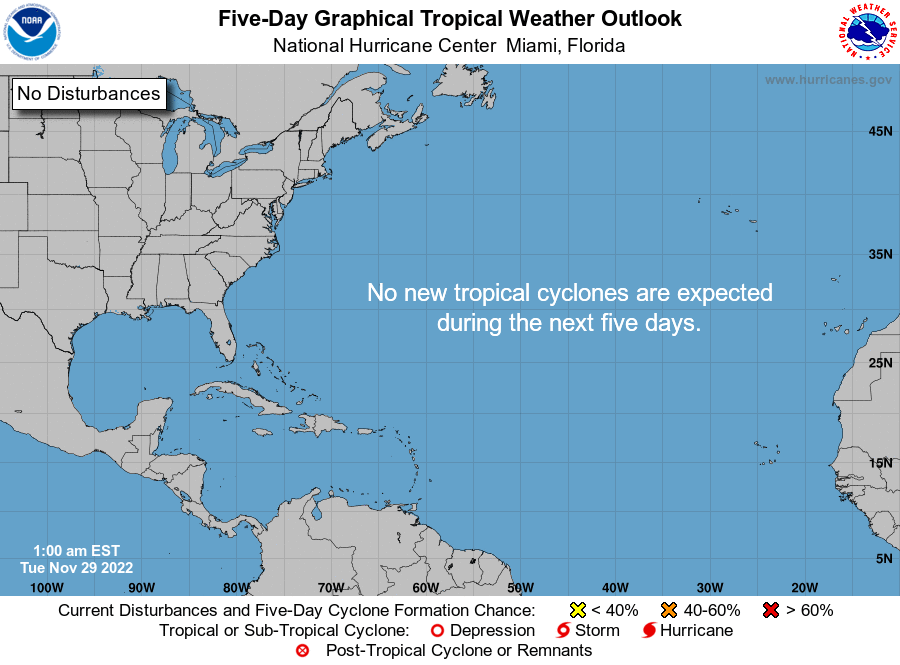