The U.S. Coast Guard on Tuesday set port condition Yankee for Puerto Rico and the U.S. Virgin Islands, as Hurricane Irma draws nearer to the northern Antilles as a Category 5 storm.

With a peak surface wind of 154 knot (nautical miles per hour) reported Tuesday, Irma is the strongest hurricane in the Atlantic basin outside of the Caribbean Sea and Gulf of Mexico in the records of the National Hurricane Center.

Irma is “a potentially catastrophic category 5 hurricane” according to the NHC, and will bring life-threatening wind, storm surge, and rainfall hazards to portions of the northeastern Leeward Islands beginning later today and the Virgin Islands and Puerto Rico beginning tomorrow.

Preparations should be rushed to completion before the arrival of tropical-storm force winds later today in the Leeward Islands and tomorrow morning in Virgin Islands and Puerto Rico, the NHC’s 11 a.m. Tuesday update. 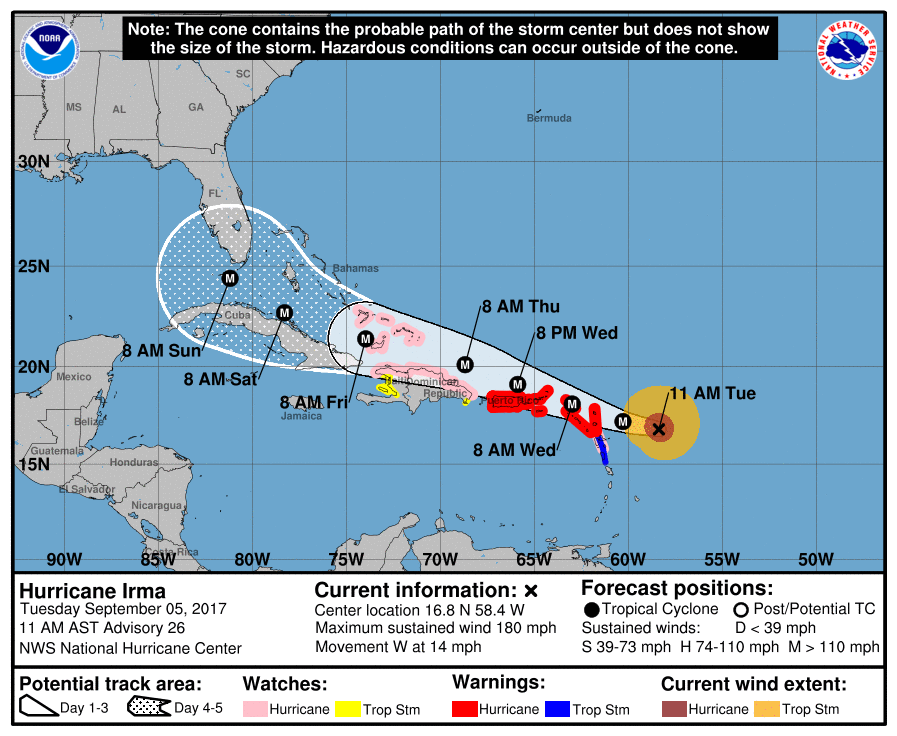 And, according to the update, a new system following behind in the wake of Irma, has been designated Tropical Storm Jose.

The Coast Guard Captain of the Port directed the maritime and port community to make final preparations and oceangoing vessels of 500 gross tons or more to depart the port unless they have an approved application to remain.

While port condition YANKEE remains in effect, port facilities will be closed to all inbound commercial traffic unless specifically authorized by the Captain of the Port.

If and when port condition Zulu is set, meaning sustained gale force winds are expected within 12 hours, port cargo operations will be suspended and the port will be closed to all vessel traffic unless specifically authorized.

The V.I. Department of Planning and Natural Resource urged all boaters should begin to make necessary preparations for Hurricane Irma. The agency urged boaters to use the three-point mooring systems found in the “Survive a Hurricane” booklet, available at VITEMA.

DPNR advised boaters desiring to take the initiative are advised to relocate to the following havens:

Hurricane Hole is under the Jurisdiction of the National Park Service, boaters must coordinate with the NPS on St. John for assigned mooring location.

Initial entry into the havens will be on a first-come, first-served basis. Enforcement officers will be available to assist boaters in maintaining an organized entry and site location for vessels or to resolve difficult situations.

Boaters will return to regular moorings once new bulletin is issued, but hurricane anchors can remain for the entire hurricane season. Vessels leaving anchors in the haven will use one mooring ball attached to hurricane anchor line marked with vessels registration number.

Vessels may not anchor in or obstruct navigational channel in Benner Bay or Salt-River. No vessels are allowed at Krause Lagoon or its channel, on St. Croix. This area is designated a Homeland Security Zone.

Irma continues to move westward at about 12 knots, and a strong subtropical ridge centered over the central Atlantic should steer Irma generally westward today. The ridge is expected to remain in place over the western Atlantic during the next several days and Irma is forecast to move west-northwestward throughout the most of remainder of the forecast period.

The chance of direct impacts from Irma on the U.S. mainland later this week and weekend is increasing in the Florida Keys and portions of the Florida Peninsula. However, the NHC said it is too soon to specify the timing and magnitude of the impacts.

A low-pressure system in the Atlantic became more organized overnight and was designated Tropical Storm Jose Tuesday morning, with sustained winds of 35 knots.

“Banding features” are starting to develop as seen in the first-light visible pictures from weather satellites. That and other readings show that a well-defined – though slightly elongated – center had formed.

According to the NHC, the environment in which Jose is located in appears to be quite conducive for development for the next three days as the SSTs are very warm, the vertical shear is very low, and there is abundant mid-level moisture. By days four and five, however, the vertical shear may increase in part due to the outflow from Hurricane Irma to its west.